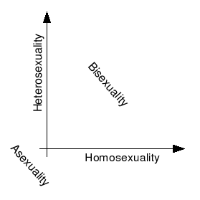 This axis is not a perfect tool for representing sexuality, and has been criticised for implying that asexuality is a 'negative' option, and completely separate from other sexualities. As we learned from the Klein Sexual Orientation Grid, sexuality is not just about who people have sex with. It is perfectly possible to be asexual as well as identifying with any other sexual identity.

Print
Add to My Shortlist

Whilst every effort has been made to ensure the accuracy of the information provided in this directory, we do not accept any responsibility or liability for any errors that have occurred. It is recommended that you always check with providers that their service or organisation meets your requirements. We offer an impartial service and we cannot recommend or endorse any providers listed.