Whilst every effort has been made to ensure the accuracy of the information provided in this directory, we do not accept any responsibility or liability for any errors that have occurred. It is recommended that you always check with providers that their service or organisation meets your requirements. We offer an impartial service and we cannot recommend or endorse any providers listed.

Aged 14 - 25? Got a great idea for solving a problem in your community? Then look no further.

Young people across England and Scotland will have the opportunity to bring their social action ideas to life, with the re-opening of vInspired cashpoint.

vInspired cashpoint offers grants of up to £500 to give 14-25 year olds the chance to change their community for the better. Due to the popularity of the programme, which has been running for five years, the age range has been extended to enable the youngest social entrepreneurs to get involved and make their mark on the issues they care about.

Over the past five years, in excess of 800 grants have been awarded. Grants have been given to young people, who have used their creativity and passions to develop projects including stand-up comedy sessions to help young people build their confidence, cycling lessons to give young women from Bangladeshi communities independence, and a community 'earth ship' to educate local people about eco-friendly living.

But the grants won't just benefit the community. Through applying for and running their projects, young people will learn vital skills and confidence, which will help them in their future careers, and perhaps even inspire them to set up their own full-scale social enterprises. Grant recipients will also be able to work towards their vInspired Awards, which officially record hours of volunteering and social action to be added to CVs or job applications. All of which will help young people build experience, develop relationships and stand out in an increasingly competitive world.

Terry Ryall, CEO of vInspired says, "vInspired cashpoint gives young people the power to make a difference in their community. We know that young people’s creativity, passion and energy has the power to change the world.  If there’s something you want to change, we want to help you make it happen. Our charity, vInspired, gives young people opportunities to do good stuff, and you can't do much better than vInspired cashpoint for that. We can't wait to see what fresh and exciting ideas our first round of applicants comes up with."

Rui George Octavio, 24, set up his project, Grab the Mike, with a vInspired Cashpoint grant. The project offers stand-up comedy lessons to help build young people’s confidence and communication skills. He says, "Getting the grant from vInspired really encouraged me to follow my ambitions. I wasn't sure whether I had a good idea, but knowing that I had an organisation that believed me really boosted my enthusiasm to make it happen. We're still running the project three years on and I have expanded my business to run motivational speaking projects for young people. I don't think I would ever have got to this stage without cashpoint."

vInspired cashpoint is run by vInspired, a national youth charity helping young people to build new skills and confidence while helping their communities through volunteering and social action.

Find out more and apply for a vInspired cashpoint grant

Grants will be awarded for not-for-profit projects that show a clear positive benefit to a community, group or the planet.

Print
Add to My Shortlist

vInspired cashpoint. Your ideas, your time, our cash. 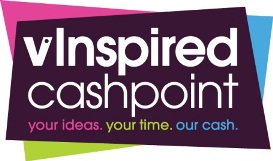